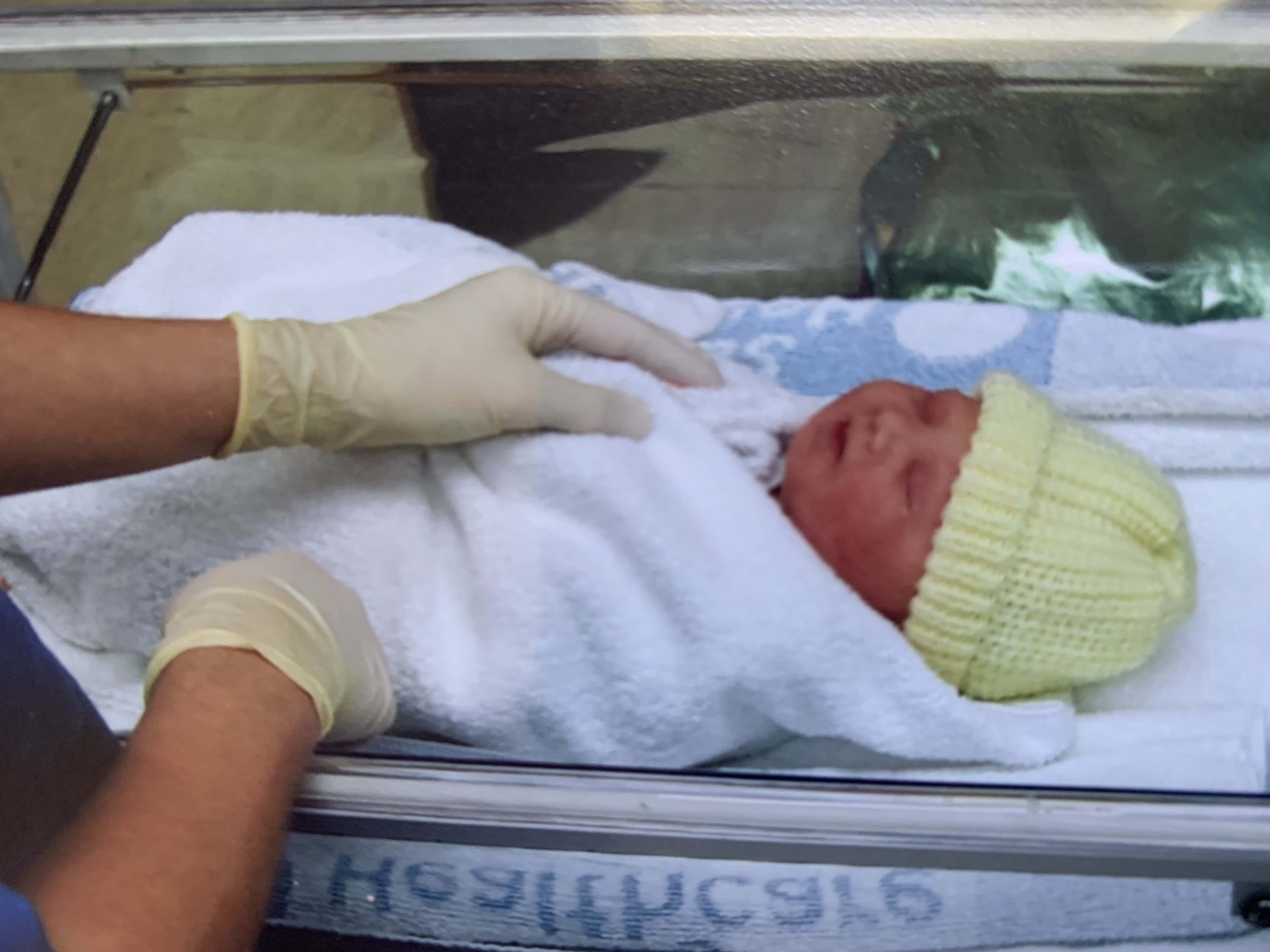 By the time the surgeon had finished stitching me back together after the c-section I had pretty much convinced myself there was nothing wrong. The doctors would have told me if there was a problem, wouldn’t they?

I was wheeled into the recovery room where a midwife helped Adrian dress the baby in a nappy, vest and babygrow. No one mentioned anything about Down Syndrome, so I decided I must have imagined it. Brand new babies often look a bit funny, don’t they? Maybe the anaesthetic medications had addled my brain.

Adrian passed Martha to me and I held her in my arms for the first time. I teased her cheek with my nipple, and after a little coaxing she opened her rosebud mouth and began to suck at my breast. Peace flooded through me as I cuddled my new child close.

Then it was time to go to the postnatal ward. I was soon settled in with my baby girl in her see-through hospital cot at my bedside. I struck up a conversation with the mum in the bed opposite and we were soon chatting about nappies, baby names and sleep (or lack of!). I felt happy and relaxed.

Adrian went home and came back later in the evening accompanied by some of the older children who were eager to see their new sister.

There was quite a party atmosphere as we passed the baby around for hugs and kisses.

All my previous newborns had followed the same pattern on their first night. They had a good breastfeed shortly after birth and then slept for a good six hours or so. After that they woke up, screaming and ravenous, usually in the middle of the night. Martha had only fed for a few minutes in the recovery room, so I fully expected her to wake hungry some time in the small hours. But when the sounds of the busy ward roused me at 6am I realised that she had slept all night without a feed. I picked her up and put her to my breast, but she was still sleepy and uninterested.

When a midwife appeared I asked for her advice.

‘My baby didn’t wake all night for a feed. She’s taken a little now, but is that something I should be concerned about? She’s still very sleepy.’

The midwife looked a little evasive.

‘Well … some babies are sleepier than others. Especially after a c-section, sometimes. Try her again in an hour.’ Then she rushed away. Maybe she was just busy. But she didn’t seem to want to meet my eye.

Once the day shift staff arrived I asked about my transfer to St Peter’s, the little low-risk unit where I was planning my lazy convalescence. Maybe it was me, but again I sensed a hint of evasion.

‘Well … let’s wait and see shall we? Your baby needs to be checked over by the doctors first.’

The hours crawled by as they do in hospital. I tried again to wake Martha for a feed and managed to persuade her to suck for a few minutes. At about 9am a young doctor arrived to do Martha’s routine paediatric check up. At least she said that’s what it was. She listened to my baby’s heart and inspected her spine and hips. She shone a torch in her eyes. Then she told me she needed to get her senior colleague to have a look.

I wasn’t sure what red eye reflex was, but I didn’t think it sounded too serious. At least she hadn’t mentioned anything to do with Down Syndrome.

I was prepared for another long wait, but the paediatric Registrar showed up at my bedside surprisingly quickly. She spent a long time looking at Martha. A worryingly long time. She didn’t say what she was looking for, and I was afraid to ask. She looked carefully at the palms of both Martha’s hands. That was when I began to feel afraid. I knew people with Down Syndrome had something different about the lines on their hands. But I was still scared to ask. If nobody said it it wouldn’t be true.

‘Yes her red reflex is fine.’, she said. ‘But she’ll need to be seen by the Consultant Paediatrician. Is your partner coming in this morning?’

Adrian was due to visit at around ten. I had been hoping he would be ferrying me and Martha over to the little low-risk hospital. Now I wasn’t so sure. I felt frightened and confused. Something was wrong with my baby, and no one would tell me what it was. The Registrar wouldn’t say why we had to see the Consultant, and I couldn’t bring myself to ask.

If nobody said it it wouldn’t be true.

My midwife wanted to know when Adrian was coming. She seemed suddenly attentive and she was being kind. Too kind. She asked me if I wanted a nice relaxing bath. Or could she get me a cup or tea? I shook my head.

‘My husband will be here soon. I’ll wait for him.’

By the time Adrian showed up I was really worried.

‘They think there’s something wrong with the baby. I think it’s Down Syndrome. The doctor was looking at her hands. The palms of her hands. But no one is saying anything. We have to go and see the Consultant.’

Apparently the Consultant was too busy or important to come to the Postnatal ward. Accompanied by the alarmingly friendly midwife, Adrian and I were escorted downstairs in the lift to the Neonatal ward on the ground floor. Martha came with us in her wheeled cot.

‘You’re so lucky to be seeing Dr Shah*’, babbled the midwife. ‘He’s such a lovely doctor. My little one has problems too, and Dr Shah has been marvellous with him.’

I know she was trying to be nice, but right at that moment I didn’t want to know about the midwife’s child. I didn’t feel lucky and I didn’t care how lovely Dr Shah might be. I was nowhere near any sort of acceptance that our own baby might have ‘problems’, whatever that might mean.

Down on the Neonatal ward the midwife disappeared and Adrian and I were left standing in a corridor with Martha in her cot. After a few minutes a nurse appeared.

‘Ok’, she announced. ‘So we’re going to put a tube down your baby.’

The nurse disappeared again and came back a few moments later.

‘Oh I’m sorry’, she said. ‘We got you mixed up with another family. Your baby’s here to be seen by Dr Shah. I’ll take you into the parents’ lounge, and he’ll meet you in there when he’s ready.

Throughly shaken, we sat in the empty lounge. Neither of us spoke. We just sat and waited. When Dr Shah appeared he examined our baby carefully. He listened to her heart, measured her head circumference, looked at her hands and her feet. Then, at last, he spoke:

‘Ok’, he said. ‘We have some concerns about your baby.  We need to do some blood tests to be sure. I think it is probable, although not certain, that she has Down Syndrome.’

We had a problem.

* I have changed the name of the doctor to protect his privacy. I should add that he did in fact later turn out to be excellent and very helpful. But I did not know that at this point.