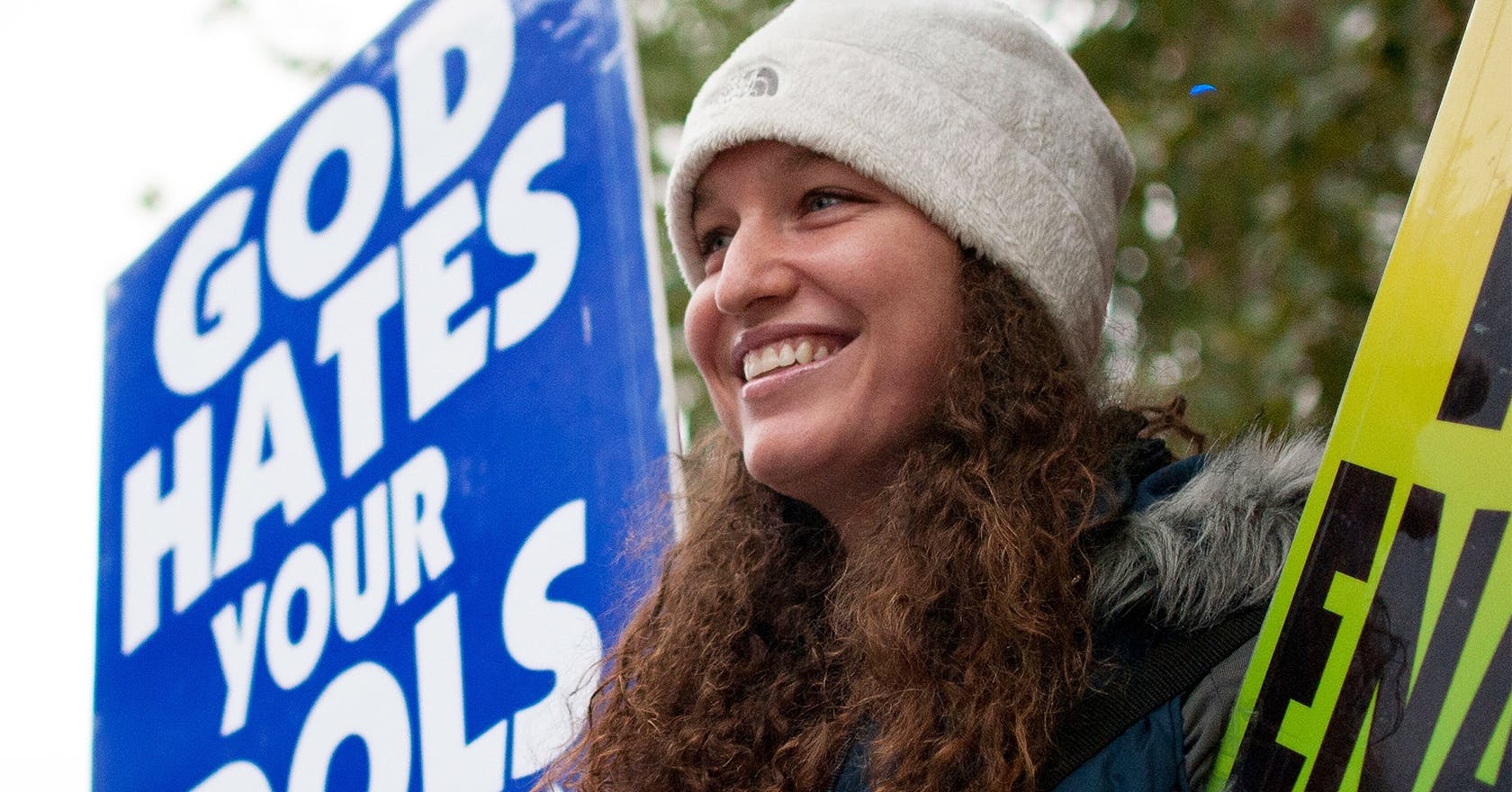 ‘We have nothing to learn from these people’

I recently read Unfollow, the autobiography of Megan Phelps-Roper. It was my most inspirational read this year.

Megan’s beloved grandfather was the founding pastor of Westboro Baptist Church. Her mother was one of its leading activists. From the age of six, Megan protested with the church several times a day. With her family she picketed schools, churches and the funerals of soldiers killed in action. She grew up to become a passionate advocate of the church’s beliefs. As a young adult she spearheaded social media campaigns spreading the group’s ‘gospel’ of destruction. In Unfollow, she tells how she came to leave the church forever.

You have probably heard of Westboro Baptist Church. Louis Theroux made three documentaries about ‘America’s Most Hated Family’. The infamous hate group has been making headlines for decades. Westboro is a tight-knit community of extreme fundamentalist Calvinists living in Tokepa, Kansas. They are known worldwide for their placards proclaiming ‘God hates Fags’ and ‘Thank God for Dead Soldiers’. Most church members belong to the same extended family. They believe God has called them to preach hate and retribution to a damned world. This they do with relentless skill and eye-watering cruelty.

I learned so much from Megan’s book. I was horrified by the arrogant callousness of Westboro’s message. But I had to admire the warmth and fun of their family life. I realised that Westboro members are intelligent and well-educated, mostly to degree level and above. We cannot dismiss them as ignorant rednecks. Fred Phelps, the fearsome hell-breathing pastor, spent many decades of his life as a leading civil rights lawyer. He defended impoverished Black litigants at a time when no one else had the courage to do so. Megan describes the joy of delightful family birthdays, laughing with “Gramps” in the pool and braiding her sisters’ hair. Her parents are caring and involved. She is loved and secure.

I found myself unable to dismiss Westboro’s banner-brandishing brotherhood as bad people. They are gifted and highly-principled. Their talents are tragically misdirected. Megan’s love for her family lights up every page she writes, often through tears. Her mother, siblings, aunts and grandfather come across as good people in thrall to a monstrous mindset. Convinced that they alone are righteous, they are sucked ever deeper into their black hole of narrowing condemnation.

Westboro members choose to put on blinders to any view which might challenge their own. They are unable to acknowledge any internal contradictions in their exclusive reading of the Bible. They inhabit a hall of mirrors endlessly reflecting a contorted vision of universal depravity.

Westboro divides the world into insiders and outsiders, saved and damned, us and them. The church requires total commitment to the whole-hearted propagation of its every teaching. If you disagree you are free to leave. You then become an outsider, hellbound, hated by God and rejected by your family. The human cost is agonising.

Megan’s mother, Shirley, is aged and seared by grief in Theroux’s third documentary. Four of her children have now left the church. They are lost to her forever. Through her tears she acknowledges the bitter sacrifice required by her faith. She fears she may lose more children. She holds fast to her beliefs. Rarely have I witnessed anything so sad.

‘We have nothing to learn from these people‘

Westboro’s members are not stupid. They are ensnared by double handcuffs: the security of belonging and their rejection of outsiders. ‘We have nothing to learn from these people’, they repeat when faced with arguments or objections from non-members. When their hateful protests provoke abuse Westboro see this as confirmatory evidence of the world’s sinful rejection of God. But they do not trust outsiders who approach them with kindness or attempt to engage in respectful debate. Kindly outsiders are viewed as Satanic deceivers. Megan came to realise that her family’s belief system was non-falsifiable. Nothing and no one could pierce the armour.

Megan began to question Westboro’s teaching as a result of her engaging with outsiders on Twitter. She became aware of contradictions which she could no longer ignore. This coincided with a harsh tightening of the church elders’ restrictions on the daily lives and freedoms of female members. Megan fought for many months to resolve her doubts. She desperately wanted to stay. But eventually she despaired. She left with her sister Grace on an icy November day. Both women were distraught to be leaving their beloved family. They were terrified of the hostility they expected from the outside world. They left weeping. The door of their childhood home closed forever behind them.

Since leaving Westboro in 2012, Megan Phelps-Roper has pondered deeply and questioned widely. How can people come to believe that the proclamation of hate is their sacred duty? Why does a group of intelligent people believe that they alone have the entire truth? What makes Westboro possible? Her conclusions are important for us all.

Westboro is not unique

Megan believes that Westboro is not unique. It is easy to dismiss an extreme fundamentalist religious group as crazy or evil. But the same human tribal instinct that fuels Westboro pervades our divided society. In an insecure world, people yearn to belong to groups where they feel safe. The echo chambers of social media make the demonization of outsiders easy and comforting. It is much easier to vilify those who disagree with us than to listen to their ideas.

Our thinking is increasingly divided into ‘us’ and ‘them’. We see it in the furious insults of the current US Presidential campaign and Britain’s bitter Brexit deadlock. We hear of people being sidelined for any hint of association with unpopular views. ‘No-platforming’ aims to protect the vulnerable but it can also threaten free speech [i]. Attempts to censor the spread of certain ideas are well-intentioned. But Megan’s experience taught her that silencing opposing views paves the way for authoritarian abuse. Groupthink thrives when free speech is gagged. Telling ourselves, ‘We have nothing to learn from these people’ is comforting. It is also dangerous.

An open letter was recently published in Harper’s Magazine expressing concern about the erosion of free speech. [ii]. Noam Chomsky, Gloria Steinem, Margaret Atwood and J K Rowling are among the 150 signatories. Many of them have been shamed or ostracised for the expression of certain religious or political views. They are worried about a growing restriction of public debate.

The open letter has itself been subject to discussion and disagreement. This process is healthy. But many of the letter’s points echo Megan’s unease. The letter speaks of ‘a blinding moral certainty’ threatening the most vital causes of our time. Blinding moral certainty is precisely how Westboro operates.

Megan Phelps-Roper has become an advocate for what she describes as ‘epistemological humility’. By this she means a willingness honestly to grapple with criticisms of one’s own beliefs. Principles and ideas are important. We can and should carry them with conviction. But we should also recognise our human vulnerability to the comfort of total belonging. An excessive certainty that I belong to the right group closes my mind to new ideas. It prevents me from engaging in constructive debate. It stifles compassion and ultimately harms the weakest among us.

We cannot protect ourselves or others by closing our eyes and ears to unattractive ways of thinking. Megan believes that, ‘the answer to bad ideas is to publicly reason against them, to advocate for and propagate better ones.’ . The open forums of Twitter enabled Megan to encounter alternative ideas. She discussed Westboro’s toxic beliefs with friends via social media. She credits this free debate with her eventual liberation.

Megan’s story has made me question my own thinking. When do I genuinely listen to the arguments of people I believe to be on the ‘wrong’ side? Am I proud of my ‘correct’ beliefs? Does this prevent me from learning new things? Does my comfortable identification with ‘my’ group or party close down compassion for others on the ‘outside’?

We all want to belong

We are all vulnerable. We all want to belong. Attempts to silence opposing ideas proliferate on the ‘liberal’ left as well as the religious right. We exclude anyone who disagrees with our orthodoxy because we already know we are right. Westboro is not unique. Westboro is everywhere.

‘We have nothing to learn from these people’ ? Never! There is something to learn from everyone. Westboro has failed to convince me of its exclusive theology. But it has helped me grasp a crucial lesson. The ability to step outside my social and intellectual comfort zone is essential. My beliefs and principles are important. They shape who I am. But I must remain willing seriously to consider the arguments of people who disagree with me. This is my safeguard against moral manipulation. Sometimes it will feel lonely. It may be unpopular. I hope it is truthful, compassionate and loving.

Karen Lawrence is a writer, mother and yoga teacher living in Billericay, Essex, UK. You can see more of her writing at https://karenlawrenceauthor.com/

Any cookies that may not be particularly necessary for the website to function and is used specifically to collect user personal data via analytics, ads, other embedded contents are termed as non-necessary cookies. It is mandatory to procure user consent prior to running these cookies on your website.