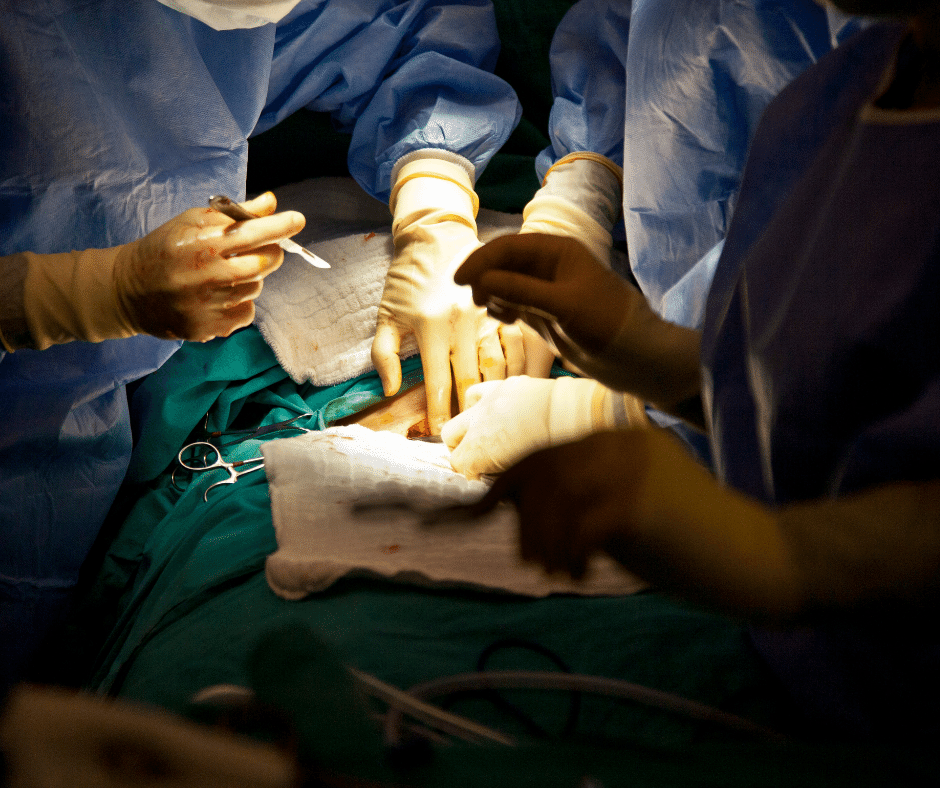 I had other plans for that day. The baby wasn’t due for another two weeks. It was a Saturday morning, and I was going to take Jerome and Verity, aged 4 and 3, to a friend’s birthday party at a local soft play centre. So the regular tightenings in my belly were a definite inconvenience, if a little exciting too.

My caesarean section was booked for the 26th of January, just a few days before my forty-second birthday. This was my seventh baby, and I had already had two c-section births, so I had had no difficulty persuading my obstetrician to agree to a surgical delivery this time. To be honest I preferred it this way. I was a busy mum who liked to be organised, so it was nice to have the birth neatly written into my diary. Everything was in order, the house clean and tidy, the baby clothes washed and ready in their drawers. Another baby would be easy. I had done this plenty of times before.

I ignored the squeezing sensations around my bump for an hour or two. Just Braxton Hicks, I told myself. It’ll ease off soon. But by ten in the morning the gripping pains were coming regularly, every ten minutes or so. As I knelt down to clean the toilet, an unmistakable contraction swept over me, strong enough that I had to concentrate on breathing through it. OK, maybe this was the real thing.

I told Adrian, and then phoned the hospital. They told me to come in. Having my seventh baby meant I was categorised as a ‘grand multipara’ – someone who has had five or more previous births. This together with my age and previous c-sections made my pregnancy ‘high risk’ in hospital speak. I didn’t see it that way, though. All my other babies had been fine, and I was fit and healthy. I wasn’t expecting anything to go wrong. However I didn’t particularly relish the discomfort of labour; I had done that more than enough times thank you! So I was happy enough to go and get my c-section sorted.

I packed a couple of bags, cancelled the children’s party plans, and drove myself to the hospital. The pains were still mild enough, though persistent, and Adrian would come and join me once he had sorted out the family at home. Nothing felt very urgent. None of my babies had arrived particularly quickly. I was an old hand at all this.

By the time Adrian arrived I was settled in an antenatal bed, drinking tea and perusing a pile of magazines while waiting my turn in theatre. A couple of paracetamol had taken the edge off the contractions, and a midwife had examined me and pronounced me to be three centimetres dilated. My baby’s heartbeat was fine, and my section would go ahead once the team were ready for me. I had requested a transfer for after the birth to the local low risk maternity unit. I intended to spend a few well-earned days recovering there, eating chocolate and relaxing in bed with my newborn. It would be a nice break from the responsibilities of home, and I hoped to linger there until the midwives turfed me out. Mothers of big families learn to grab whatever holidays they can wrangle!

It was mid-afternoon by the time Adrian and I made our way down to the theatre, suitably gowned and capped. I was familiar with the procedures from Jerome and Verity’s births. I sat on the edge of the high operating couch curled up over a pillow while the anaesthetist administered the spinal. Then I was lying down, blood pressure cuff on my arm and a drip in the back of my hand. Adrian sat by my head, the screen went up to shield us from the view of my insides, and the surgeon appeared and introduced herself. A radio was playing music in the background. The medics were chatting calmly, the anaesthetist friendly at my side. Everything felt normal and safe.

Soon there was a rummaging and pulling sensation in my belly. I couldn’t wait to see the baby now. Would it be a boy or a girl? I was quietly hoping for a girl this time, partly because I liked the name ‘Martha’ we had recently agreed on.

As I squeezed Adrian’s hand the infant was lifted from me. Someone took it straight to the resuscitation trolley on the far side of the room. I didn’t hear it cry at first, but I wasn’t too worried. I knew babies sometimes needed a little help to start breathing, especially after a c-section. All of my other babies had been fine. I couldn’t hear what the medics were saying over there by my baby, but I was sure everything would be fine.

‘It’s a little girl’, someone told me. ‘Doctor’s just checking her over. You can see her in a moment.’

Sure enough the mewling wail of a newborn rang through the air. I realised I had been holding my own breath. Now I smiled and felt Adrian relax at my side.

The midwife came over carrying a little bundle wrapped in a white NHS towel. A tiny pink face peeped out.

‘Here’s your baby’, said the midwife.

I looked at my baby.

I knew instantly, the moment I saw her face.

A voice in my head said,

‘Oh. She’s got Down Syndrome.’

But I didn’t say it aloud.

No one said it aloud.

Everyone carried on as though nothing was wrong.

So I told myself I had imagined it.

If I didn’t say it, or even think it,

perhaps it wouldn’t be true.

Karen Lawrence is an author and mother of seven living in Billericay, Essex, United Kingdom. Letting the Light In is Karen’s personal account of having a baby with Down Syndrome. It will be published in book form in the autumn of 2021. You can read more of this story and more of Karen’s other writing at her website, https://karenlawrenceauthor.com   If you would like to receive further instalments of Letting the Light In delivered free to your inbox, please sign up at https://karenlawrenceauthor.com/join-the-mailing-list/   Karen’s first book, Finding Your Calm Space: Thirty-One Ways to find Calm in a Crazy World is available from Amazon at https://www.amazon.co.uk/Finding-Your-Calm-Space-Thirty-One-ebook/dp/B08NZ1W9QY/ref=sr_1_3?dchild=1&keywords=finding+your+calm+space&qid=1606147885&s=books&sr=1-3
Tags: disability, Down Syndrome, Downs Syndrome, DS Baby

The Best Part Of My Day

Holding my Grandson in Advent

Knots in Your Life