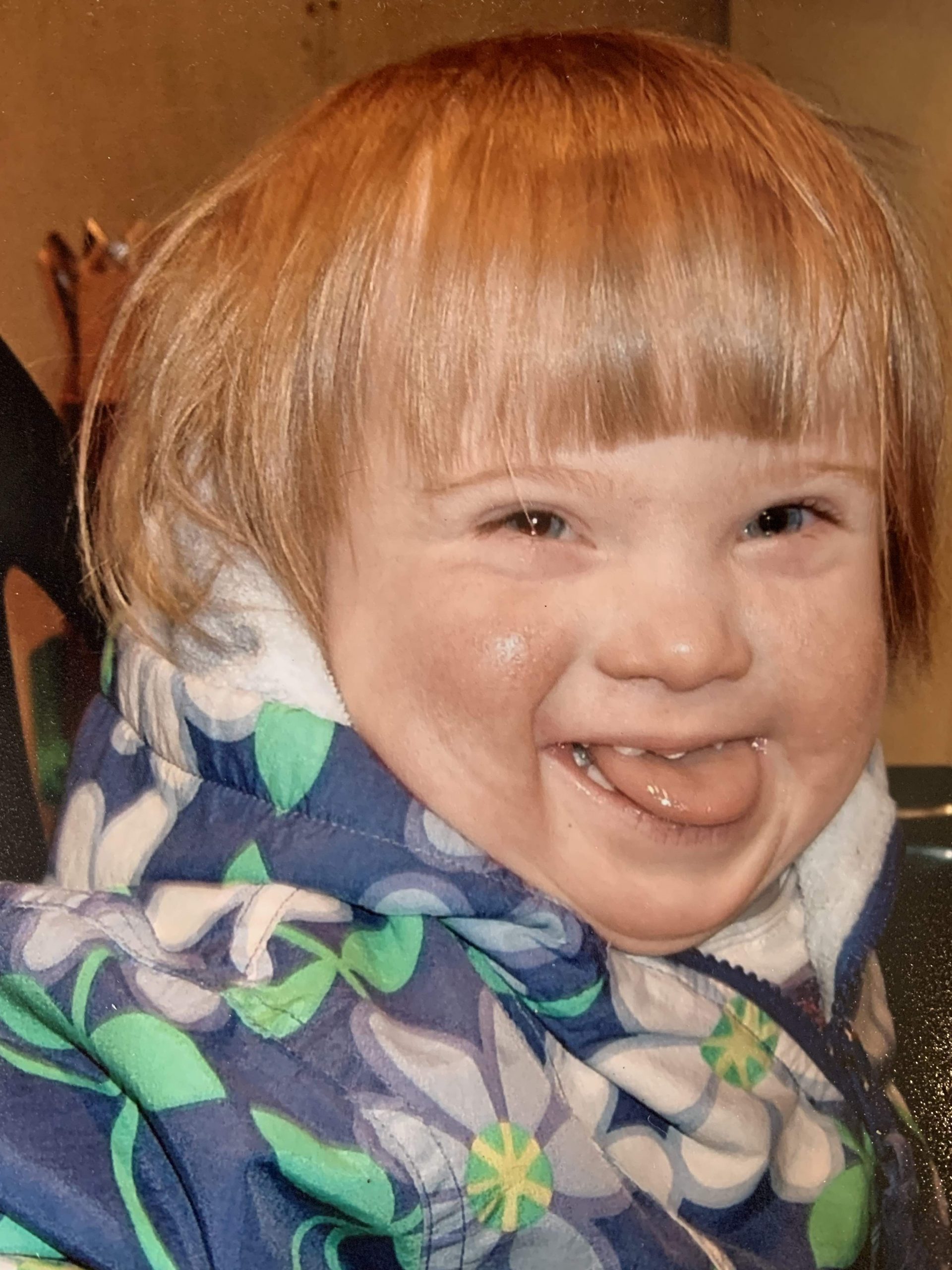 As Martha passed her first birthday and continued to grow, our focus was increasingly on her communication and development. Her health was generally good now. She had occasional heart check-ups where the doctors pronounced themselves delighted with the outcome of her surgery. She ate well, and, despite my best attempts to persuade her otherwise, lost all interest in breastfeeding by about fifteen months. I was sad to stop breastfeeding my last baby sooner than I had hoped, but Martha was just too interested in taking in the fascinating world around her.

Her hearing was more of an issue. Children with Down Syndrome tend to have very narrow ear canals which easily block up with mucus, resulting in glue ear and hearing loss.* Since Martha was likely to be slow to learn to speak due to her learning disability, any hearing impairment was a big deal. So she went twice for surgery to insert grommets.**.

Compared to her cardiac operation, grommets seemed pretty minor, so the first time round I went to the hospital with Martha on my own. Although the nurses were lovely, this was more demanding than I had blithely anticipated. Keeping a nil-by-mouth child happy and entertained on the morning before any operation is hard work. Then I got anxious because the procedure took longer than I had been told to expect. It is hard not to start imagining the worst when you are alone and your child is in theatre. In the end the procedure went fine, but I was a wreck by the time we finally returned home.

Eight months later, when more grommets were required, I had learned my lesson. This time I asked two wonderful friends to accompany me and Martha for her day surgery. The whole experience felt so much easier when I wasn’t trying to do it all on my own. Slowly, and still with some reluctance, I was learning to ask for help when I needed it.

Most children with Down Syndrome have difficulty and delay in learning to talk.*** But they tend to understand much more than they can say. This was certainly true for Martha. One of the most positive activities we enjoyed together was simple sign language. Adrian and I attended a course for parents to learn Makaton. This is a language with signs and symbols designed to be used alongside speech for people with learning or communication disabilities.**** We were thrilled when Martha first started waving hello and goodbye. Soon she added the signs for ‘food’, ‘drink’ and ‘more’ to her vocabulary. ‘Biscuit’ and ‘cake’ also became firm favourites. We were communicating!

The ‘Sing and Sign’ classes designed for babies and toddlers of all abilities were so much fun, and so helpful. Martha and I learned lots of songs with accompanying signs we could practice together at home. The teacher was wonderful, and I felt that we belonged.

Later, when Martha was two years old and attending nursery, I trained to become a baby signing teacher myself. This became my first foray into the world of work since Martha was born. It gave me a new sense of freedom and identity. I loved welcoming parents and babies along to my classes. As well as many typically developing children, several toddlers and babies with special needs came along. We all enjoyed singing, dancing and learning to sign together. Some of those mums have become firm friends. I would never have got involved with any of this without Martha to show me the way.

Martha’s regular round of therapists continued, but I gradually became less in awe of them. At the beginning I had believed that everything depended on the right therapy. Maybe if Martha had enough speech therapy, enough physio, if I did all the right activities with her every day, maybe her Down Syndrome would somehow go away. Or at least it might hardly be noticeable.

But as the months rolled on, and especially after that first Christmas, I began to accept Martha as she was. Yes I wanted to get her all the support she needed to grow and learn. Yes I still spent many hours encouraging her to interact and communicate. But I no longer had that desperate need to change her. She would always have Down Syndrome. It was an aspect of who she was. And that was ok.

This growing acceptance had some surprising results. Now, if I didn’t think a therapist was actually helping, I would say so. Politely of course! I even said no thank you to the offer of a specialist health visitor, and also asked for a change of speech and language therapist on one occasion. Just because someone was sent to my home by the education or health authorities did not necessarily mean they had all the answers. Frequently the therapists were great, but not always.

All the therapies and interventions consumed a lot of time and energy, so they had to make a difference. I no longer felt obliged to make Martha do all the exercises and activities proposed. We did the ones that worked for us. Martha didn’t belong to the speech therapist or the occupational therapist or the specialist teacher. She didn’t even belong to the doctors. I was her mother, and I knew her better than anyone else.

It can take a long time to reach this realisation when your child needs a lot of medical and therapeutic input. Of course all the professionals had a lot of invaluable input. We were extremely grateful for it. But Martha was part of our family. And we loved her exactly as she was. She was herself, and that was just fine.

*Hearing loss and recurrent ear infections are common problems for children with Down Syndrome. You can read more about this here:

**Grommets are tiny tubes inserted into the eardrums to equalise pressure inside the ears. The operation is done under a general anaesthetic. You can read more about grommets here:

***You can read a very interesting article about speech and language development in children with Down Syndrome here:

**** Makaton is used by over 100,00 children and adults either as their main method of comunication or to support speech. You can learn more here:

Letting the Light In: Chapter Eleven: A Summer of Waiting

Letting The Light In: Chapter Fifteen: You Only Have To Love This Child